Jan. 26, 2015: We’ve scoured the Web to find the best and most compelling animal stories, videos and photos. And it’s all right here. 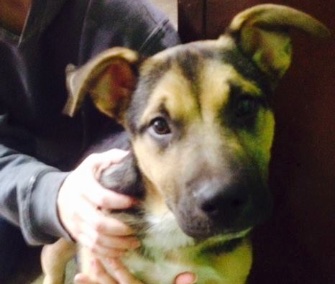 On Saturday morning, a man called 911 in Muncie, Indiana, to report he’d found a puppy in a dumpster behind a business and couldn’t manage to get him out. Police and staff from the local animal shelter quickly arrived on the scene and struggled to free the 5-month-old pup, who they named Miles. Although the German Shepherd mix puppy was “very scared,” he had no injuries. "He appears to be perfectly healthy. And very cute,” said Muncie Animal Shelter director Phil Peckinpaugh. “He’s such a sweet and friendly dog, and even though he was tossed in the trash by someone, he was still VERY affectionate and loving to the staff upon his arrival,” the shelter said on its Facebook page. “He is resting comfortably, eating like crazy, and enjoying being played with here at the shelter.” They plan to update everyone when Miles is ready for a permanent home. — Read it at Indiana’s Star Press

In October, there was an international outcry when Excalibur, a dog belonging to a nurse in Spain who was fighting Ebola, was put down over fears the dog could spread the deadly virus. There was no evidence the dog was infected, and the nurse, Teresa Romero, was devastated when she recovered from the disease and learned about her dog’s fate. Now, there’s much happier news for Romero: On Saturday, Romero and her husband, Javier Limon, adopted an American Staffordshire Terrier from the animal shelter Cipa Alcorcon. They named the dog Alma, which means “soul.” The couple said they wanted to “serve as an example so these [rescue] animals can have a family like Alma and be happy.” — Read it at the U.K.’s Independent

Research from a veterinarian at the University of Western Australia finds a surprisingly high and “very concerning” incidence of polycystic kidney disease (PKD) in pygmy hippos. Using the autopsy reports of 179 captive adult pygmy hippos, Dr. Gabriella Flacke found the condition present in 45 percent of hippos who’d lived in the wild and been captured, and 32 percent of those who’d been born into captivity. She also found that hippos tend to have a slower onset of the disease, in which multiple cysts form on the kidneys, and can live with the condition for a long period of time. — Read it at Discovery News 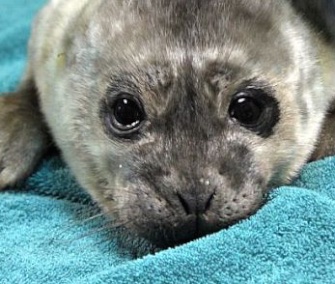 Pupping season has started early at The Marine Mammal Center on the coast of California. Just a few days into 2015, an abandoned harbor seal pup was found at The Biltmore, a Four Seasons Resort located on the beach in Santa Barbara. The fuzzy gray pup was just days old and couldn’t have survived without his mom. He weighed about 12 pounds when he was brought to the center for rehabilitation, and was named Yule in reference to the holiday season. He’s been tube-fed around the clock for the last three weeks because he’s so young. So far, Yule seems healthy and is getting stronger each day. He’s been enjoying the company of a large harbor seal stuffed animal that the staff put in his pen, since he’s the only seal at the facility right now. Yule faces a long road to recovery, but the center plans to release him when he’s ready. — Read it from The Marine Mammal Center

Blue, a Pit Bull who was found 1,100 miles from home in Indiana, was reunited with her owner in Galveston, Texas, Saturday — thanks to the generosity of a volunteer. Blue was only a few weeks old when she disappeared from JoeAnn Navarro’s backyard in May. She was found last week at the Kokomo Humane Society Shelter in Indiana, and identified through her microchip. When Navarro said she couldn’t afford to travel to get her puppy, Ricky Mitchell, a retired sheriff’s deputy in Galveston County, stepped in. After hearing about Navarro and Blue, he and two friends offered to drive to Indiana to pick Blue up, and then drove straight back to Galveston. “I’d want someone to do it if my dog was in trouble like that and I didn’t have the funds,” he said. Mitchell said it was all worth it when he got a hug from Navarro, and that he planned to keep in touch with her and Blue. — Read it at the Galveston Daily News