Feb. 11, 2015: We’ve scoured the Web to find the best and most compelling animal stories, videos and photos. And it’s all right here. 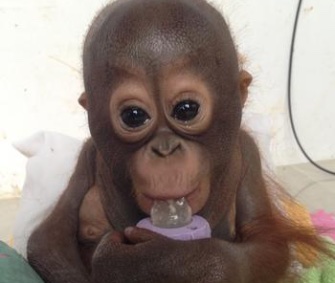 A baby orangutan’s caretakers at the Orangutan Rescue Center in Ketapang, Indonesia, have been relieved to see signs of improvement in his condition over the last few weeks. The ape was rescued from terrible conditions in West Borneo in December. International Animal Rescue found Budi deformed and very weak. They said he’d been kept in a chicken coop and fed only condensed milk for about 10 months. While the group doesn’t yet know how much of the damage Budi has suffered is permanent, they report that he’s been making great strides recently. "Budi is a very strong little baby and he is fighting very hard to survive," said Dr. Karmele L. Sanchez, the group’s program director in Indonesia. IAR says that Budi, who was once too weak to open his own mouth, is now able to pull himself up and opens his mouth at the sight of food. — Read it at The New York Daily News

There’s promising news for Carmen, the 9-year-old Boxer who’s fighting for her life after attempting to save her owner from a fatal fire in their Cincinnati home. Veterinarians at the Cincinnati Care Center say she was successfully taken off a ventilator Tuesday afternoon. They report she’s conscious and alert and breathing through her nose, which is a big step. "She’s doing very well. We’re very happy with where her progress is at this point," said critical care specialist Dr. Marlo Anderson. Meanwhile, well-wishes and donations from around the world have been pouring in for Carmen. — Read it at Cincinnati’s WCPO

The U.S. Fish and Wildlife Service announced Tuesday it would spend $3.2 million on efforts to save the iconic monarch butterfly, which migrates thousands of miles between the U.S. and Mexico each year. The species has had a 90 percent population decline in recent years, with its lowest numbers recorded in 2013-14. The money will be used to restore 200,000 acres of its habitat in the U.S. and to start the first conservation fund dedicated solely to monarchs. The FWS is currently reviewing whether the monarch should be classified as threatened under the Endangered Species Act. — Read it from the AP via Yahoo 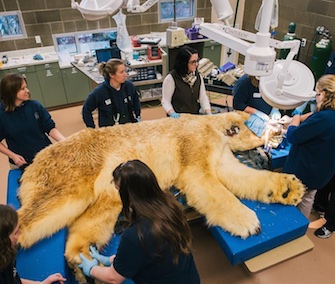 There was an extra large patient in the dental chair on Friday at the Point Defiance Zoo in Washington state. Boris, an 880-pound polar bear, had a three-hour procedure to have three damaged teeth removed. While the 29-year-old bear was anesthetized, veterinarians were also able to do a thorough physical exam. Boris is one of the oldest polar bears living in North American zoos — and polar bears in the wild generally live to be just 15 to 18 years old. But the vets said Boris is generally in good health. Much like a human dental patient, he’s eating soft foods until his mouth heals, the zoo said. — Watch it at Science Daily and see photos at Facebook

Minutes after taking his Miniature Schnauzers, Sissy and Barney, for a walk last week near his Iowa home, Dale Franck realized Sissy was missing. “I was scared to death and I was crying,” he said. “I’m sorry, but that’s my baby.” At 5 a.m. the next day, he got a call from Mercy Hospital where his wife, Nancy, was being treated for complications from a cancer-related surgery. Somehow, Sissy had made her way to the hospital, 20 blocks away, where Nancy was staying, even though she’d never been there before. Nancy’s daughter, Sara Wood, went to pick Sissy up. After all of Sissy’s effort to get there, the hospital staff allowed Wood to bring the dog in for a quick visit with Nancy. “We could only stay a few minutes but I’m sure she enjoyed every second of that few minutes,” Wood said. — Read it at The Blaze