Feb. 2, 2015: We’ve scoured the Web to find the best and most compelling animal stories, videos and photos. And it’s all right here. 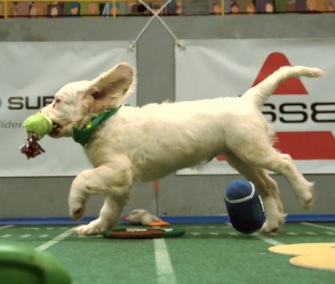 Sunday was a TV day — and we’re not talking about the Super Bowl. We were tuned in to the Puppy Bowl and the Kitten Bowl! This was the 11th Puppy Bowl for Animal Planet, but it was the first time the adorable adoptable players have been divided into teams — and it was the highest-scoring game ever. Team Ruff, in green, ran away with the game, easily defeating Team Fluff, in yellow. Still, Cara, a 14-week-old Shih Zhu from Team Fluff, was named the Puppy Bowl XI MVP. The show featured several vignettes about the touching rescue stories of the puppy players, and highlighted the importance of animal adoption. At halftime, Katty Furry impressed the audience with her flashy show, while sporting a blue wig. Speaking of cats, over on the Hallmark Channel, the kittens were the athletes. The Kitten Bowl players pounced on the ball and climbed right up the goal post to make their scores, and most of these feline stars were also adopted. — Read it at IGN.com and watch Puppy Bowl highlights from Animal Planet

Bart, a 2-year-old cat from Florida, made headlines last week with his amazing story of survival. His owner, Ellis Hutson, says he asked his neighbor to bury his cat, who he thought was dead, after he found him injured on a road. Five days later, Bart reappeared and Hutson took him to the Humane Society of Tampa Bay for medical treatment. Now, officials from the Humane Society say they don’t plan to give the cat back to Hutson after he’s recovered because they don’t think Hutson can provide him with the kind of special care he needs. “We don’t have any intention of returning the cat for lots of different reasons, and I’m hoping that [Hutson will] see the light and do the right thing for Bart,” said executive director Sherry Silk. Hutson said he wants Bart back, and blamed the trouble on a GoFundMe page started by his neighbor, which has raised $7,000. Silk said the Humane Society has paid all of Bart’s medical bills and hasn’t seen any of that money, but said that wasn’t the issue. — Read it at Florida’s WFLA

Los Angeles firefighters saved a 7-year-old Shiba Inu mix from a raging river after getting a call from someone at Warner Bros. Studios in Burbank Friday. Crews believe the pooch was swept about three miles downriver before he was saved by firefighter John Terrusa, who was lowered into the water by a helicopter to retrieve him. Once they were safely back on the banks of the Los Angeles River, the firefighters dubbed the dog Lucky and worked with bystanders to warm him up. The dog had an injured a leg but was otherwise recovering well. He was wearing a collar but was not microchipped, and will stay at the shelter for seven days to allow his owner time to come forward. If Lucky’s owner doesn’t claim him, he’ll be available for adoption. — Watch it at NBC Los Angeles 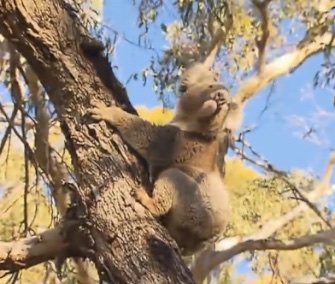 Last month, we told you about the koalas being treated for burns they suffered in bush fires in South Australia — and how they needed those cute mittens to protect their paws. Now, there’s good news for Jeremy, a koala who became one of the faces of the blaze: he’s been released back into the wild. The marsupial was named for one of his rescuers, Jeremy Sparrow, and Sparrow was there to see his namesake off last week. At least a dozen koalas are still being treated for their burns by different rehabilitation groups, and will be released when they’ve recovered. — Watch it at Australia’s 7News

NASA astronaut Leland Melvin’s official picture has gone viral, thanks to two additional family members who appear in it. In the photo, Melvin wears his orange uniform with the American flag behind him in a traditional setting for NASA. But in a twist, his two pups are climbing on his lap, and one is licking his cheek as the astronaut flashes a big smile. Melvin, whose Twitter handle is @Astro_Flow, was surprised by the popularity of the photo and Tweeted another shot of the dogs sitting at attention by his side — “the time when they were behaving.” — See photo at People Pets