Jan. 22, 2015: We’ve scoured the Web to find the best and most compelling animal stories, videos and photos. And it’s all right here. 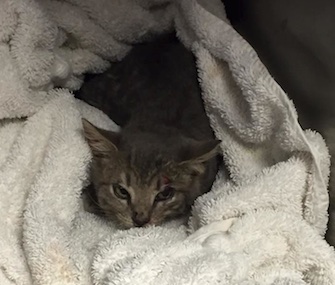 Orange County, Florida, sheriff’s deputy Meyer Ghobrial was traveling on Orlando’s busy highway 417 Tuesday when he spotted a small gray kitten in the middle of the road. Ghobrial pulled over and stopped three lanes of traffic to save the cat. Other drivers stopped to help, too — but the 10-week-old kitten was so scared that she crawled into the engine of one of the stopped cars. A motorist at the scene put on gloves to pull her out, and Ghobrial drove her to a local animal hospital. She suffered from minor scrapes and bruises as well as an injury to one of her hind legs, but the veterinarian who treated her says she’s going to be fine. The kitten, who was named Lucky, is now up for adoption, the sheriff’s office said in a Facebook post. — Watch it at Click Orlando

Another Florida county is doing its part to help animals, too. Last week, we told you about the misprint on the Pinellas County Sheriff’s Office rug that read “In Dog We Trust,” instead of “In God We Trust.” The rug was displayed in the office lobby for months until a deputy noticed the mistake earlier this month. The office, which paid $500 for the custom rug, decided to auction it off online because there was so much public interest in it. It sold Wednesday for $9,650 — and all of that money will go to an animal rescue called Canine Estates. — Read it at USA Today

New research suggests that climate change could do more harm to chimpanzee populations than previously realized. The Nigeria-Cameroon chimpanzee, which is the world’s most endangered chimp subspecies, lives in a habitat threatened by logging, agriculture and illegal hunting. Now researchers say the chimps face a dramatic habitat loss in the next five years due to climate change. “We were surprised to see that the Nigeria-Cameroon chimpanzees living in the savanna-woodland habitat of central Cameroon are under the most immediate threat of climate change, and may completely lose their habitat within our lifetime,” said lead author Paul Sesink Clee of Drexel University. The study was published in the journal BMC Evolutionary Biology. — Read it at Science Daily 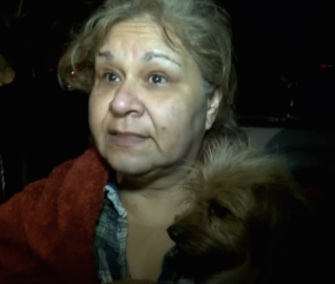 A 2-year-old dog named Foxy is being credited with saving her family from a fire that started at about 2 a.m. Wednesday in their Santa Ana, California, home. "She began barking like crazy," said resident Vera Mendez. "It woke up my son and he woke all of us up.” There were seven adults and one child sleeping in the home, and they all “barely escaped,” Mendez said. The Orange County Fire Authority credited the pooch with saving the family, too, Tweeting “2 yr old family dog named Foxy woke up the family & she is the hero." The fire caused about $200,000 in damage, and the cause hasn’t yet been determined. — Read it at NBC Los Angeles

Prankster Jimmy O’Brien bought a life-sized stuffed German Shepherd for his younger brother. But he might be the one having the most fun with it. A funny video he uploaded to YouTube shows his mom being spooked by the fake dog over and over again — all within just a few minutes. "My mom did not like [the dog]," O’Brien wrote in the video’s caption. "Scared her about 5 times within 3 minutes." O’Brien told Today that the family has a real dog, but it’s just the fake one who scares his mom. “It didn’t even need to sneak up on her. You could say, ‘Hey mom, look at this dog,’ and she would still jump," he said. Now he’s waiting to see if his mom seeks revenge. — Watch it at Today