Jan. 23, 2015: We’ve scoured the Web to find the best and most compelling animal stories, videos and photos. And it’s all right here. 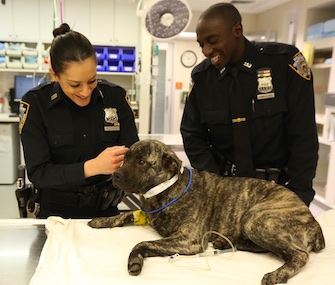 Two New York Police Department officers responded to a report of a “vicious dog” on the Grand Central Parkway in Queens, New York, Monday. But when they arrived, what they found was a frightened and injured 6-month-old Pit Bull mix curled up in the middle of the busy highway. Officer George Morinia-Blocker maneuvered the police car to keep Officer Melissa Mezzoiuso safe from traffic as she approached the puppy. When she realized the dog couldn’t move on his own, she picked him up and the two officers drove him to the ASPCA for help. The officers aren’t sure whether the dog, who’s been named Huxley, was injured before or after he entered the roadway. They visited Huxley Tuesday at the ASPCA hospital in Manhattan, where he had surgery for a broken front leg. He’s now “resting comfortably” and getting around-the-clock care. ASPCA officials are asking anyone with information on the dog to contact them and said it’s too soon to know when Huxley might be available for adoption. — Read it at the New York Daily News

The San Jacinto, California, police are mourning the death of K9 officer Sultan, who was killed Wednesday by a wanted felon. The armed man had barricaded himself inside a home, and police say he shot Sultan when the dog entered the home. The man was later fatally shot by police. Sultan was taken to the veterinarian, where he later died. "We’ve lost a family member, we’ve lost one of our own," San Jacinto Mayor Crystal Ruiz said. "He was an amazing, amazing officer.” Sultan, a Belgian Malinois and German Shepherd mix, started working in San Jacinto in 2013, reported Fox News. Hundreds of people from the community and across the country posted their condolences on the police department’s Facebook page. — Read it at NBC

Record Number of Rhinos Poached in South Africa in 2014 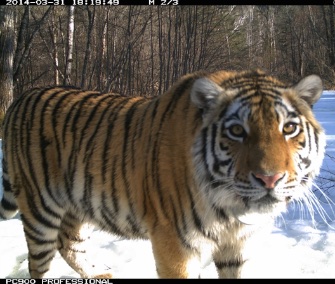 A female Amur tiger known as Zolushka, which is Russian for Cinderella, may have found her fairy tale. Scientists say she seems to be thriving after being released into the Russian Far East in 2013 after a long rehabilitation. The tiger was found as a cub in the winter of 2012, orphaned, starving and frost bitten. She spent 15 months in a Russian federal rehabilitation center, where her natural fear of humans was kept intact and she learned to hunt live prey. She was released back into the Bastak Reserve, a former tiger territory, in the spring of 2013. Her GPS signal has faded but the Wildlife Conservation Society and the reserve’s staff set up camera traps. They recently found that Zolushka has paired up with a male tiger who recently arrived in the area, and he may be her Prince Charming. They’re hopeful that cubs will soon be on the way. “If cubs are born, it will be the ultimate sign of success in returning tigers to this once empty landscape,” said Dr. Dale Miquelle, director of the WCS Russia Program. — Read it at Science Daily

We’ll leave you this Friday with a happy adoption story. Iona, who’s 102 years old, found the perfect match when her son brought her to the Montgomery County Animal Shelter in Texas. She said she needed a companion after the cat she’d had for 10 years passed away last week. Edward, a fluffy 2-year-old gray and white cat, won her over right away. "The way he cuddled upon my shoulder reminded me of the cat I’d just lost," she said. The pairing “touched my heart,” said Barbara Bates, the shelter’s adoption coordinator. She thought Iona and Edward had lots of love to give each other, and didn’t hesitate to approve the adoption because Iona’s son promised the cat would stay with the family should anything happen to his mom. — See photo at the Huffington Post