Feb. 9, 2015: We’ve scoured the Web to find the best and most compelling animal stories, videos and photos. And it’s all right here. 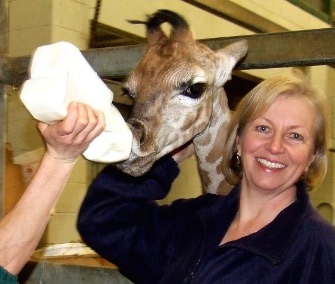 A 1-month-old Rothschild’s giraffe calf named Eliska is thriving at the U.K.’s Paignton Zoo, despite being rejected by her mother, Janica. Eliska’s keepers feed the 6-foot baby up to two gallons of milk a day in four feedings. She may need milk for up to nine months. The zoo has been grateful to Riverford Dairy, a local organic dairy farm, which has pledged to supply Eliska with all the milk she needs. The dairy’s staff is giving up their own free milk supplies to help feed the calf. Eliska’s keepers plan to introduce her to the zoo’s herd as soon as possible, so she understands she’s not a human. — Read it at Zooborns and see more cute zoo baby photos

They may not look fierce, but a Swedish researcher finds tiny Norwegian lemmings give a sharp warning call when a potential predator, such as a human, approaches them. The rodents also have coloring that makes them stand out from their surroundings and the other more common rodents in the area. Researcher Malte Andersson, of the University of Götenborg in Sweden, says the coloring and other tactics make this an instance of aposematism, meaning that they lemmings are trying to make predators think they’re more trouble to mess with than they’re worth. "The Norwegian lemming combines acoustics with visual conspicuousness, probably to reduce its risk of becoming prey," said Andersson. His findings were published in the journal Behavioral Ecology and Sociobiology. — Read it at Discovery News

Cat Finds His Way Back to Rescuer

Last spring, a fluffy gray cat with a white-tipped tail showed up on Ann Bosche’s Mississippi property. “I said, ‘Aren’t you a fancy thing?’ " With that, Bosche, who’s known for rescuing animals in her area, named him Mr. Fancy. But because she already had a dog and two cats, she made the tearful decision to give up Mr. Fancy to a local animal shelter. She didn’t know that just 20 minutes after she left the shelter, he escaped. A month later, Mr. Fancy showed up at Bosche’s home again. "This cat spent a month traveling along busy streets, rail road lines and rough neighborhoods trying to find me," she said. "I think he had a guardian angel looking out for him, directing him back to my house … He belongs here." — Read it at People Pets 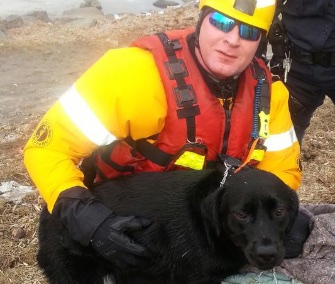 Dani, a 1 ½ year old black Lab, is safe thanks to firefighters from Burke, Virginia. According to a Facebook update from the Fairfax County Animal Shelter, the dog trotted out onto the thin layer of ice covering the lake after a ball Friday afternoon, and fell through. Dani’s owner tried to go in after her, but realized he couldn’t reach her and called 911. Wearing a water suit, firefighter Tony Doran broke through ice and went into the freezing water to rescue Dani. He was eventually able to get ahold of her collar and pull her to safety. The fire department is reminding residents of how dangerous it is for anyone to go out on ice. — Read it at Washington’s WUSA 9 and get tips on ice safety

When the 140-person crew of the USCGC Polar Star gathered for an official photo outside their icebreaker on Jan. 31, someone else waddled into the center and struck a pose: an Adelie penguin. The U.S. Coast Guard crew is on a 4-month mission to Antarctica as part of their annual operation to help ships resupply the National Science Foundation research center McMurdo Station. The icebreaker creates a channel through the McMurdo Sound so supply ships can deliver a year’s worth of food, fuel and other supplies. The curious penguin residents have been known to investigate their Coast Guard visitors in the dozens of years that they’ve been making this mission. — See photo at Buzzfeed