Feb. 3, 2015: We’ve scoured the Web to find the best and most compelling animal stories, videos and photos. And it’s all right here. 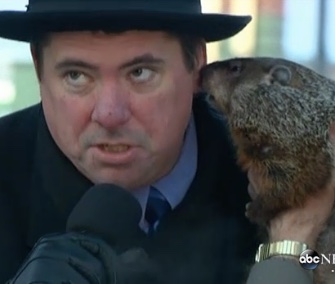 Jimmy the Sun Prairie, Wisconsin, groundhog, apparently wasn’t thrilled to attend a Groundhog Day ceremony Monday, despite arriving in a limo. When his handler held Jimmy up to Mayor Jonathan Freund’s ear so he could whisper whether there would be six more weeks of winter weather, the critter swiftly bit Freund’s ear. Although the mayor said spring was coming early, the groundhog’s handlers said Jimmy’s prediction was for more winter. Last year, New York Mayor Bill de Blasio accidentally dropped the Staten Island groundhog. The animal later died but it was unclear whether it was a direct result of the injuries it sustained from the fall. This year, New York avoided groundhog incidents by changing the protocol with Staten Island Chuck. The animal stayed in a portable enclosure while looking for his shadow, and de Blassio held up a sign saying Chuck predicted an early spring. “Chuck, I want to thank you for this new approach,” de Blassio said, according to The New York Times. “I think we finally understand each other.” — Watch it at ABC News

Little pikas are related to rabbits and are known for delighting hikers and backpackers in the California mountains, but a new study finds they are disappearing from low-elevation sites because of climate change. After surveying 67 sites where pikas have historically lived, researchers found that the animals disappeared from 10 of them. Joseph Stewart, a graduate student at UC Santa Cruz, said pika populations were most likely to go locally extinct at sites with high summer temperatures and low habitat areas. "They are uniquely adapted to cold temperatures, but these same adaptations make the species vulnerable to global warming," Stewart said. The study was published in the Journal of Biogeography. — Read it at Science Daily

A 6-month-old sea otter named Mishka is settling into her new home at the Seattle Aquarium after a FedEx flight from Alaska last weekend. Mishka, whose name means “little bear” in Russian, weighed just 10 pounds when she was found entangled in a fishing net in July. She got around the clock care at the Alaska SeaLife Center and now weighs 26 pounds, but the U.S. Fish and Wildlife Service determined she couldn’t be released into the wild. Staff members from the ASLC traveled with Mishka to keep her transition stress-free. She will be acclimated to her new home in Seattle over the next few weeks before being introduced to another resident sea otter. — Read it at Alaska’s KTUU 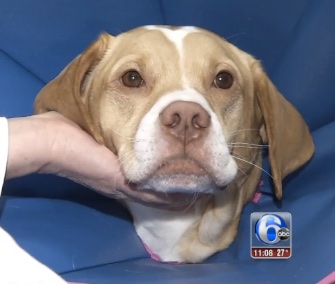 A 4-year-old mixed breed dog ate a large amount of his owner’s calf-high leather boots on Friday. The volume was too much for Vince’s stomach to pass to his small intestines, so veterinarians at the Veterinary Specialty and Emergency Center in Philadelphia did surgery Saturday to remove the leather and metal eyelets. "Leather is particularly appealing to dogs but we’ve seen dogs eat different things as well — forks, spoons, baby pacifiers, toys — all variety of different things," said Dr. Laura Tseng. Vince is now recovering at the center and will be heading home in the next few days. — Watch it at Philadelphia’s ABC6 and see photos at the New York Daily News

Rare Calico Kitten Gets a Home

A very special calico kitten was adopted Saturday in California. Sherman might look like any other calico-colored kitty — but the fact that he’s a he makes him quite unusual. Most calico cats are female. “It’s like a unicorn!” said Humane Society Silicon Valley veterinarian Andrea Berger. “I’ve been involved with shelters for 20 years and I have never seen one.” The Humane Society said on its Facebook page that the friendly 4-month-old kitten found a new home at an adoption event at Petco. — Read it at SF Gate