Feb. 12, 2015: We’ve scoured the Web to find the best and most compelling animal stories, videos and photos. And it’s all right here. 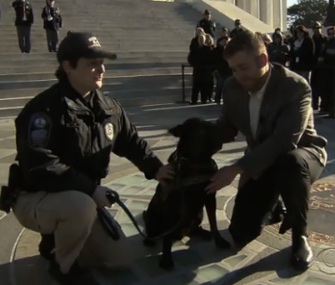 Jared Heine, a former Marine, suffered from post-traumatic stress disorder and constantly talked about how much he missed Spike, the K9 partner he served with in Afghanistan and hadn’t seen in three years. "He was like my brother, my kid. He slept with me every day like we were inseparable,” said Heine, who now lives in Louisiana. Thinking a reunion with Spike would help her son, Mary Heine tracked the dog down with the help of friends on Facebook. It turned out that he’s now part of the Virginia Capitol Police K9 patrol — and is adored by his handler of two years, Officer Laura Taylor. On Wednesday, Heine visited the Virginia Capitol, where he got a chance to reunite with Spike and meet Taylor. "[Spike] is more important to me than anybody can know, but we have to do what is right for the whole situation," Taylor said through tears. "Take good care of him," she told Heine as she hugged him. "He means everything to me." Heine promised he would, and Taylor’s police chief said she’ll soon get a new K9 partner. — Watch it at CBS News

The U.S. Fish and Wildlife Service says the endangered gray wolf killed by a hunter in Utah in December was the same one who’d been spotted in Grand Canyon National Park. The sightings in the Grand Canyon had raised conservationists’ hopes that the wolves were returning to the area, but they’d suspected the wolf, a 3-year-old female named Echo, was the one who was killed. The positive identification was made with a DNA analysis. The hunter said he mistakenly thought Echo was a coyote, but an investigation into the killing of the endangered animal is ongoing. — Read it at the Los Angeles Times

Iditarod Route Changed Due to Lack of Snow

The Northeastern U.S. may be having record amounts of snow this year, but Alaska is facing a low-snow winter. That’s led to a rare shift in the route of the iconic Iditarod Sled Dog Race. On March 7, the race will start in Fairbanks instead of Willow, Alaska, because of a lack of snow cover on the trail. In its 42-year history, the 1,000-mile route has only been changed one other time, in 2003. "This year, you can’t go through a rock," musher Aaron Burmeister told the News-Miner. "There’s boulders and rocks that we’ve never seen there in 20-some years that are littering all the gorge, places that you’d never even see a rock because you’re going over feet of snow going through there. This year, you’re looking at bare ground." — Read it at USA Today 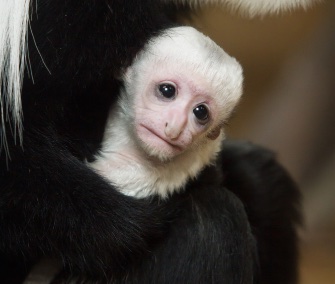 Look at that sweet little face! Simon, a male Colobus monkey, was born to experienced mom Celia and dad Kima at the Saint Louis Zoo in Missouri on Dec. 30. He joins his big sister Kivuli and several other family members at the zoo. “Older sister Kivuli has taken particular interest in her new baby brother and is often seen holding or even carrying him,” says Joe Knobbe, a primates manager at the zoo. “She’s learning important skills that will help her become a great mother, too, someday.” Colobus monkeys are born with all white hair and a pink face. The infants’ coloring gradually changes to black and white, and they have full adult coloration by the time they reach about 6 months of age. — See photos at Zooborns and check out more cute zoo baby photos

Australia’s oldest living man, Alfie Date, has been knitting for 80 years, and loves to take requests. So last March, two nurses at his retirement home asked if he’d like to create sweaters for penguins in need. He grabbed his knitting needles, and his creations were donated to Victoria’s Phillip Island Penguin Foundation. They’re worn by little penguins who were affected by an oil spill. Oil caused the penguins’ feathers to stick together, which exposed their skin to the cold. The sweaters helped the birds keep warm while they waited to have their feathers cleaned, and also protected them from consuming the oil by picking at their feathers. The sweaters from Date and other volunteers allowed the group to fully rehabilitate many of the little penguins. — Read it at People Pets