Jan. 29, 2015: We’ve scoured the Web to find the best and most compelling animal stories, videos and photos. And it’s all right here. 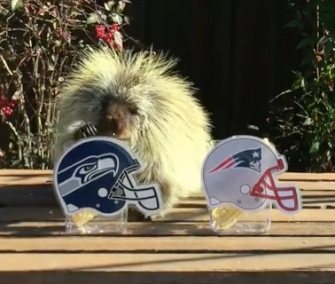 Everyone’s favorite talking porcupine, Teddy Bear of Zooniversity in Texas, is hoping to go four-for-four in his Super Bowl predictions. In a new video, he swiftly decides in favor of the Seattle Seahawks over the New England Patriots in Sunday’s game — by choosing the corn in the container with the Seahawks emblem. Teddy Bear, who’s scored millions of page views with his YouTube videos in the last few years, took to Facebook Wednesday to clarify for some commenters that his prediction was made fair and square. “My human put 3 ears of corn in BOTH teams’ containers. No cheatin’. No riggin’. Come on now, I’m a simple po’pine. I care about corn,” he said in his post. Now you just need to watch and predict whether this porcupine has it right. — Watch it at YouTube

Experts are worried that this winter may be the worst season ever for California sea lions because so many pups are winding up starved and stranded on beaches in Southern California. Scientists aren’t sure why this is happening but theorized that a scarcity of natural prey is forcing nursing moms to venture farther for food, leaving their young pups for longer periods of time. They said a mild El Niño effect in the ocean this season may be making food even more scarce for the sea lions. The stranded animals are taken in by area rescues, and it generally takes about 6 to 8 weeks for them to gain enough strength to be released. — Read it from Reuters via Yahoo

Study: Chimps With High-Ranking Moms Do Better in Fights

Much like kids, young chimpanzees face teasing, taunting and bullying from their peers. Researchers observed the interactions of chimps under age 12 and determined the winner of each of their fights based on which chimp did most of the hitting, kicking, biting or chasing and which one squealed, cried or ran away. They found that those with higher-ranking moms were more likely to win their battles. Although the moms rarely intervened in the fights, having a “bodyguard” nearby may be enough to help some chimps. “Or it may be that offspring of higher-ranking moms are bigger or stronger for their age, either because they and their moms had priority access to food or because the same genetics that made their moms high-ranking give them a competitive advantage, too," said lead author Catherine Markham of New York’s Stony Brook University. The study was published in the journal Animal Behaviour. — Read it at Science Daily 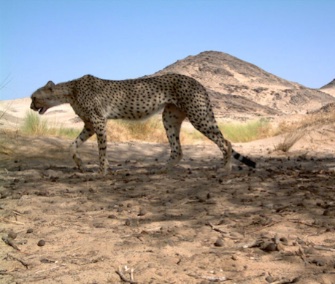 Scientists have released extremely rare photographs of the critically endangered Saharan cheetah in Algeria’s Ahaggar Cultural Park. The camera trap photos are some of the only images of the elusive cheetah subspecies. The researchers published the photos with a study on the big cats in PLOS ONE. They said they suspect there are less than 250 of the animals left in the Sahara, but found that the park provides a relatively healthy habitat for them. While many of the images were taken using infrared technology, this one might be the rarest in the group because it shows one of the cheetahs hunting during the daytime. The cats are usually only active at night so they can avoid heat and contact with humans. — Read it at Discovery News

For one very cuddly day, the car service Uber offered on-demand puppy delivery in 10 cities Wednesday. As a promotion for Animal Planet’s Puppy Bowl, adoptable puppies from local shelters in Atlanta, Baltimore, Cleveland, Dallas, Washington, D.C., Denver, Indianapolis, Los Angeles, Phoenix and Seattle could be driven to your office for some adorable playtime at a cost of $30 per 15 minutes. All of the money went to the participating shelters. Uber required that anyone requesting puppies have a closed off area in their office for the pups to hang out in, and have permission from the boss before their arrival, reported Sports Illustrated. — See photos at People Pets