Jan. 30, 2015: We’ve scoured the Web to find the best and most compelling animal stories, videos and photos. And it’s all right here. 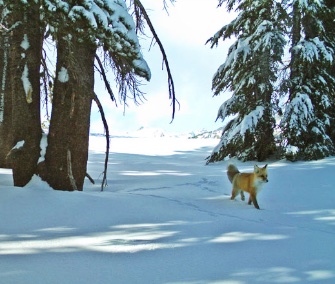 Wildlife biologists have confirmed the first sightings of a Sierra Nevada red fox inside Yosemite National Park for the first time in nearly 100 years. The biologists went on a 5-day trek into the far northern backcountry of the park to check the motion-sensitive cameras they had deployed. The cameras had documented two separate sightings of the elusive fox in December. Experts say it’s one of the rarest mammals in North America, with only about 50 remaining in the wild. The nearest confirmed sightings of the foxes have been in the Sonora Pass area, north of the park, in 2010. Officials plan to put out hair snares at each camera station in the park so they can try to find out if the fox or foxes there are genetically related to the ones from the Sonora Pass area, according to a statement from Yosemite. — Read it from the AP via U.S. News

Back in 1878, a famous British ornithologist named Allan Hume, who was working in India, received an owl specimen from an acquaintance. The owl, from what’s now Pakistan, became known as Hume’s owl. Henry Tristram, another ornithologist at the time, had collected an owl with similar markings. "Hume had named his bird, and Tristram thought [his owl] was the same thing," said Guy Kirwan, a research associate at the Field Museum of Natural History in Chicago and co-author of a new report on the owls. Now, more than a century later, a DNA tests on specimens from museums around the world have confirmed that owls referred to as Hume’s owls were actually two different species. "We believe that we have now named the right new species," Kirwan said. The new 12-inch desert tawny owl, called the Strix hadorami, after renowned ornithologist Hadoram Shirihai, has light brown feathers on its back and lives in the Middle East. The findings on the owls were published in the journal Zootaxa. — Read it at Live Science

A year and a half after his German Shepherd was stolen from his backyard in Alberta, Canada, a heartbroken Richard Brower decided it was time to look for a new dog. He searched online for German Shepherds. The first site he looked at was for the Claresholm Animal Rescue Society — and he was shocked when he saw his missing dog, Dozer, in the first photo he looked at. He called the shelter, and his dad, who was traveling back from a business trip, stopped there on his way home. Dozer immediately started wagging his tail when he saw Brower’s father. Still on the phone, Brower told his dad to snap his fingers and see what the dog did. The well-trained dog circled Brower’s father once and sat on his right-hand side — exactly what Dozer had been trained to do. "My dad was bawling, I was bawling on the phone," Brower said. Dozer was thrilled when Brower’s father brought him home. "He almost knocked me over," Brower said. "He came flying in, put his head into my arm and started doing that wailing that German Shepherds do." — Read it at CNN 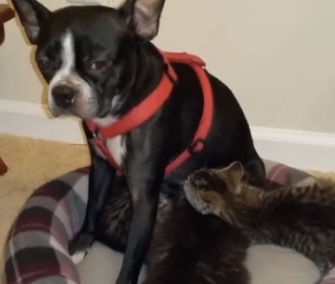 Memory, a Boston Terrier, never had puppies of her own — but she knew just what to do when she found four orphaned kittens out in the cold. Memory’s owner, Shannon Williams, said the nurturing dog had been afraid of cats before she met the kittens, but she didn’t let that get in the way of helping them. She showered them with love and even nursed them. "She’s been very protective from day one," Williams said. A veterinarian told the Huffington Post that the needy kittens might have triggered a false pregnancy in Memory, allowing her to start producing milk. Williams has now found new homes for three of the kittens, and the fourth will stay with her so Memory can continue to take care of him. — Read it at People Pets

A realistic-looking 8-foot polar bear has been spotted all over London this week, from the Millennium Bridge to the Underground. The life size bear was operated by two puppeteers inside who practiced for weeks to get the right gait. The bear’s appearances are part of a promotion for Sky Atlantic’s new series, Fortitude, which is based in the Arctic. "We wanted … to give people an up-close experience of what it must be like to come face to face with one of the biggest, but uncredited stars of our new show," said Sky Atlantic director Zai Bennett. — Read it at UPI