Feb. 5, 2015: We’ve scoured the Web to find the best and most compelling animal stories, videos and photos. And it’s all right here. 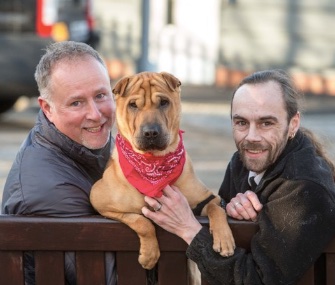 Kai Gets a New Start

There’s a happy ending for Kai, the Shar Pei mix who was found abandoned at a Scottish train station with a suitcase full of his belongings last month. His story and the heartbreaking photo of him tied to a railing and left with his suitcase attracted worldwide media attention, and hundreds of dog lovers from around the world offered to give him a home. Now, the Scottish SPCA says it has selected Ian Russell, 52, to be Kai’s new owner. Russell brought Kai home on Wednesday. "Being the one to rehome Kai is a bit like winning the lottery,” says Russell. Russell’s Dalmatian, Mica, passed away just before Christmas after he’d had her for 15 years. He first called the SPCA just to see if there was anything he could do to help Kai, but now he thinks it’s fate that he’s the one bringing the dog home. Russell is a self-employed hydraulic engineer, and Kai will spend his days traveling to work sites with him, and getting the chance to get out and run around outdoors. "We know Kai will have a fantastic new life with Ian and we couldn’t be happier for him,” said the Scottish SPCA’s Alan Grant. — Read it at the U.K.’s Telegraph

A new frog was identified in Bangladesh after researchers noticed its unusual breeding habits. While most frogs have a specific breeding season, this frog bred all year long, including during winter months. The 1.5-inch frog was named Euphlyctis kalasgramensis, for the Bangladesh village of Kalasgram where the frogs were found. The frogs live in pools of water that collect in forests and crop fields, which puts them at risk from farming pesticides that pollute the water, researchers said. They’re hoping the study, which was published in the journal PLOS ONE, will raise awareness that the frog needs protection. — Read it at Live Science

Report: No More Corgis for the Queen

Queen Elizabeth II is famous for having her beloved Corgis by her side. She’s had more than 30 of them throughout her life, beginning when her father brought one home from a local kennel in 1933, when she was a young girl. But we may be seeing the end of an era. Reports say the 88-year-old queen doesn’t plan to take on any more pets because of her advanced age. "The fact is she worries about too many dogs around her feet and the danger she will trip up and hurt herself badly," an unidentified member of the royal court told the U.K.’s Express. "Her corgis are getting on a bit and move along at a sedate speed, but a young dog would obviously be very lively and much more active. Her main fear is that if she fell and broke her arm or even a leg she would not be able to perform her duties for many weeks if not months, and that would upset her greatly." Her current Corgis, Willow and Holly, appeared in a video shown at the opening of the London Olympics in 2012. — Read it at People Pets 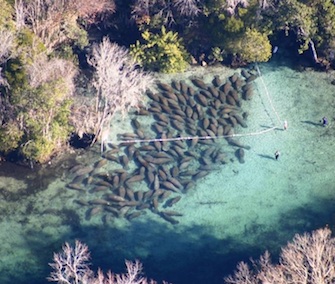 Endangered manatees seem to be enjoying an early spring break at Three Sisters Springs in Florida. The U.S. Fish and Wildlife Service temporarily closed a one-acre plot of water there this week to kayakers and swimmers when more than 300 of the large creatures crowded into the area unexpectedly. Manatees congregate in the area during high tide and cold weather, said Laura Ruettiman, an environmental education guide at the Springs. "We have a record number this year," Ruettiman said. "We have 150 more manatees here than have ever been recorded in the past." She said the high numbers could have resulted from greater protection in the area, as well as their loss of habitat in other parts of Florida. — Read it at USA Today

Fara, a female Eastern black rhino calf, was born at the Chester Zoo in England on Jan. 31 to mom Kitani and dad Sammy. The critically endangered baby’s birth was caught on camera, and keepers said it went smoothly. “Her arrival is another step towards sustaining a black rhino population which, in the wild, is being ravaged by poachers on an almost daily basis,” said the zoo’s curator of mammals, Tim Rowlands. There are believed to be less than 650 of the species remaining in wild. “All being well, Fara will also one day play her own breeding role in a program which, in some cases, has already seen some black rhinos return to Africa to help boost numbers. For the time being, though, she is forging very important early bonds with mum.” — See photos at Zooborns and check out more cute zoo baby photos in our gallery