Feb. 6, 2015: We’ve scoured the Web to find the best and most compelling animal stories, videos and photos. And it’s all right here. 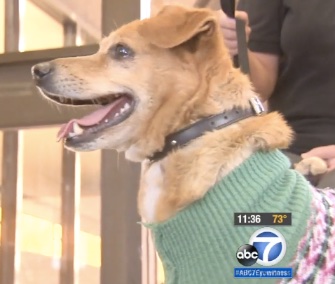 Last Friday, this 7-year-old Corgi-Chihuahua mix was dramatically rescued by helicopter from the waters of the swollen Los Angeles River. On Thursday, he went off to a new life with the woman who first spotted him struggling in the river and called firefighters for help. The pooch stole Rachel Dalby’s heart as soon as she saw him. "On the phone with the fire department dispatch officer I said, ‘You know, I want to adopt this dog,’ and he says, ‘Well let’s get him rescued first,’" Dalby said. After they airlifted the dog to safety, the firefighters named him Lucky and brought him to a local shelter to be treated for hypothermia. Dalby went to visit Lucky every day, and when no owner came to claim him after a week, she was able to officially adopt him. She said she plans to bring Lucky to visit the firefighters who rescued him soon. — Watch it at ABC7 Los Angeles

In 2010, keepers at the Edinburgh Zoo in Scotland put a group of chimpanzees raised in the Netherlands together with a group raised in Scotland and got fascinating results. The Dutch chimps loved apples and used a high-pitched grunt to refer to them. The Scottish chimps, however, didn’t like apples and used a much lower-pitched grunt to refer to them. After three years of living together, the researchers were surprised when the Dutch chimps started using the low-pitched grunt for apples. The change suggests that the Dutch chimps learned the word from their Scottish counterparts. "Our study is the first one to show that chimps do have some control over the structure of these food grunts," said study researcher Katie Slocombe of the University of York in England. "When exposed to a different social culture, they can choose to shift the structure of their calls to conform and give a different grunt." The findings were published in the journal Current Biology. — Read it at Live Science

Rare moonfish, or opah, have been appearing unexpectedly in scientific surveys along the southern California coast recently, allowing researchers to study and photograph the elusive fish. In November, photographer Ralph Pace caught photos of a 130-pound moonfish after it was accidentally caught by researchers and then released. He described it as "probably bigger than a manhole cover." Researchers have also discovered moonfish can move quickly through the water, keeping up with tuna and swordfish. — See photo at National Geographic 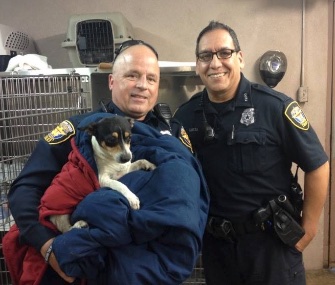 Fort Worth, Texas, police came to the rescue of a stray Rat Terrier who was scampering down the center lane of busy Interstate 30 last week. They set up a temporary roadblock, and dashboard cams show them trying to catch her. When they eventually get her, off camera, cheers and honking from onlookers can be heard on the video, which was posted on YouTube Wednesday. Officers Paul Garcia and Allen Speed say “she was evading us,” but they were able to lure the dog using treats from the back of Garcia’s cruiser and then grabbed her with a blanket. The officers named the dog Beach because she was captured near Beach Street exit and brought her to the Humane Society of North Texas. Beach was adopted on Thursday afternoon. — Watch it at Texas’ WFAA

The car service delivered happiness in the form of adorable kittens to customers in Sydney, Perth, Geelong and Melbourne, and Brisbane and the Gold Coast of Australia for four spectacular hours Thursday. The kittens were residents of local shelters, and the fee of about $30 went to Sydney’s Cat Protection Society. Customers could request a visit from the kittens via an Uber app and had to answer some screening questions for the kittens’ safety. The kittens were snatched up quickly, and many customers hoping to see them were met with the response, "All kittens are being snuggled.” Last week, adoptable puppies were available to visit offices in 10 U.S. cities in an Uber promotion for the Puppy Bowl. — Read it at CNET Australia