Feb. 4, 2015: We’ve scoured the Web to find the best and most compelling animal stories, videos and photos. And it’s all right here. 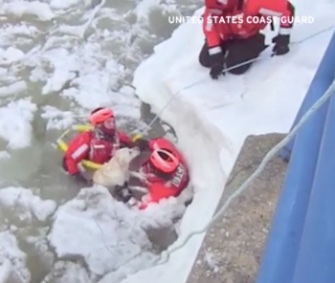 Members of the U.S. Coast Guard were having a meeting Tuesday morning when they saw a yellow Labrador Retriever plunge into the frigid waters of Michigan’s Betsie Lake, which was covered with loose chunks of ice. "We knew he wasn’t getting out himself,” said Tim Putnam, a boatswain mate third class. So, the crew rushed out to save the dog. Putnam swam about 200 feet to help to the shivering pooch, who tried to swim toward him. "It was almost like he knew it was his last chance. Luckily we got him out in time.” Once Putnam got ahold of the dog, who they later discovered was female, his crew members pulled them to safety. She was brought to a local animal shelter and is recovering well. She didn’t have a collar or microchip, but was reunited with her owner Tuesday night, reports Up North Live. Meanwhile, on Tuesday afternoon, firefighters in Arlington, Massachusetts, saved another Lab from icy waters. A black Lab puppy named Lucy broke loose from her owner to chase swans she spotted on the Mystic River and fell through. Crews wearing warm suits brought her to safety. — Watch it at NBC News and find out how to keep your dog safe around ice

Gray seals, with those big, sweet-looking eyes, have long been thought to eat fish like cod. But new research confirms previous studies that have found the seal is becoming one of the most vicious predators in the southern North Sea. The huge gray seals have been seen mutilating and suffocating harbor seals and porpoises in the region. It all runs contrary to the gray seal’s image as “a nice, cuddly, friendly animal that eats fish," said marine biologist Mardik Leopold of the Institute for Marine Resources and Ecosystem Studies in the Netherlands. Experts have several theories on why gray seals have started going after these animals. They may have developed a taste for porpoises after preying on those trapped in fishing nets; the fish they normally eat may be becoming scarce; or they may have returned to old habits after recolonizing in the area. The new study will be published next month in the Journal of Sea Research. — Read it at National Geographic

To the average person, different species of guenons might look quite similar. But a computer program is able to distinguish between them based on their mustaches, nose spots, eyebrow patches and ear tufts. Researchers said computer algorithms like this might be helpful to scientists who are studying evolution. They could, for example, look at which aspects of a monkey’s face are important to its evolutionary success. "We sought to test a computer’s ability to do something close to what a guenon viewing other guenons’ faces would do," said study author William Allen, who worked on the program while at New York University. "The [new] study further supports the hypothesis that guenon facial diversity is related to species recognition and the need to avoid hybridization," said James Higham of NYU, a co-author of the study. The study was published in the journal Proceedings of the Royal Society B. — Read it at Live Science 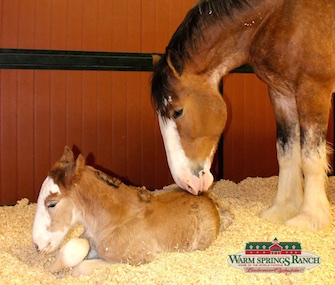 While the nation was tearing up over Budweiser’s popular “Lost Dog” ad on Super Bowl Sunday, a new star was being born. A baby Clydesdale arrived at Budweiser’s Warm Springs Ranch, in Boonville, Missouri, just minutes before the cute commercial aired. The horse was named Arizona, in a tribute to the location of Super Bowl XLIX. Arizona and her mom are doing well so far. She’ll meet the rest of the horses and begin training in the spring. — Read it at People Pets

If you can’t get enough puppies, there’s a new Web cam now to help you get your fix. The Maryland-based therapy dog non-profit Warrior Canine Connection has launched a live cam on Explore.org streaming the napping, training and playtime antics of its litter of adorable Labrador Retriever puppies. These pups will grow up to be therapy dogs for military veterans diagnosed with post-traumatic stress disorder or mild brain injuries. — Watch it at USA Today