Jan. 27, 2015: We’ve scoured the Web to find the best and most compelling animal stories, videos and photos. And it’s all right here. 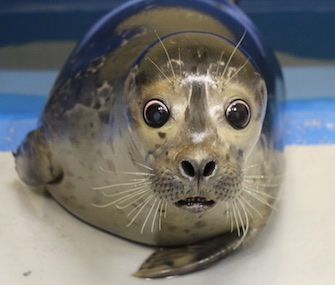 Bryce, a blind harbor seal pup, was found in Homer, Alaska, at the end of December and taken in by the Alaska SeaLife Center. The veterinary staff believes a head trauma likely caused his vision loss, and he’s been deemed non-releasable because of it. The staff has noticed Bryce has a heightened reliance on his hearing, and they’ve been using that to teaching him basic skills, such as hand-feeding and targeting. “While harbor seals are normally quite shy and skittish, staff have been pleasantly surprised by Bryce’s spirit of adventure as he quickly explores pools, enrichment items, and other changes to his environment,” the ASLC said in a Facebook post. “We think Bryce’s biggest accomplishment is the impressive ability to use his other senses and thrive in his environment.” Veterinarians have noticed a slight improvement in his sight, but only in one eye. Bryce will stay at the Alaska SeaLife Center until a permanent home can be found. — Get updates from the Alaska SeaLife Center on Facebook

An anonymous donor has stepped up to offer a $20,000 reward for information on a horrific case of animal cruelty in New York. On Thursday, a 3-year-old Pit Bull was found malnourished inside a suitcase that was thrown into a dumpster behind a housing development in the Bronx. "The dog was in critical condition when he came into our care," said ASPCA spokeswoman Natasha Whitling. "He is now receiving life-saving intensive medical treatment." The NYPD is investigating and asking anyone with information on this sad case is asked to call Crime Stoppers at 800-577-TIPS. “Such callous disregard for a living creature is unconscionable, and should not go unpunished," ASPCA President Matt Bershadker said in a statement Saturday. — Read it at People Pets

An adorable endangered Bornean orangutan born on Jan. 12 is being hand-reared at Germany’s Zoo Berlin. Keepers made several attempts to keep the baby with her 11-year-old mom, Djasinga, but the two didn’t bond and Djasinga failed to care for her infant. Luckily, the baby is healthy and strong under her keepers’ care. She gets a bottle of formula every two to three hours. Bornean orangutans are native only to the island of Borneo and face extinction because of extreme habitat loss. The baby is currently spending her days behind the scenes at the zoo. — See photos at Zooborns 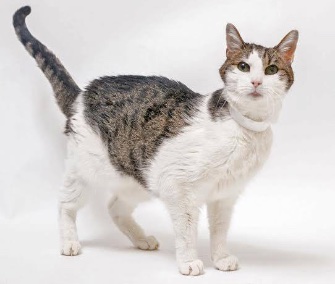 Fourteen-year-old feline Achilles was found in a carrier on the street in San Francisco’s Tenderloin district with a note that read, “Help me. My name is Achilles, I was born on Aug. 8, 2000, good health, need good home, very friendly,” according to the Shelter Pet Project. He was taken in by Tonis Kitty Rescue. A veterinary checkup revealed Achilles had a minor thyroid problem, which is easily helped with daily medication. The rescue is now looking for a good home for Achilles. — Find out more from Tonis Kitty Rescue

The San Francisco Zoo is offering a couple of unique adopt-an-animal Valentine’s Day packages — for your ex. This year, you have the chance to adopt a Hissing Cockroach or Giant Hairy Scorpion in the name of your ex-boyfriend or girlfriend. “Lovers send a clear ‘it’s over’ message whilst simultaneously making a contribution to the conservation of animals,” the zoo said. And if you’re still in a happy relationship, the zoo has options for you, too, including adopting a Red Panda, Magellanic Penguin or Ring-tailed Lemur. — Find out more at the San Francisco Zoo