Jan. 28, 2015: We’ve scoured the Web to find the best and most compelling animal stories, videos and photos. And it’s all right here. 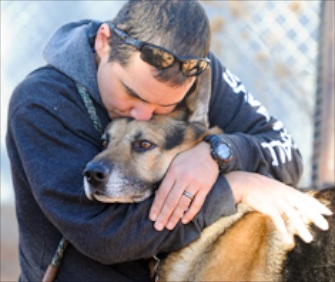 Bela, a German Shepherd who stole hearts all over the world last month, died Sunday at the Best Friends Animal Sanctuary in Utah. The dog from Indiana made international headlines when word got out that his owner, who died in November, had stipulated in her will that the dog, who had some aggression issues, be cremated and laid to rest with her when she died. There was also an option that said Bela could go to live at Best Friends, but his owner, Connie Ley, never contacted Best Friends about that plan. The sanctuary learned of the dog’s plight through the media and reached out to the woman’s attorney and the executor of her will, saying they would give 9-year-old Bela a home. In a heartwarming turn of events, Best Friends announced they were headed to get Bela on Christmas Eve and bring him back to the no-kill shelter. But on Sunday, just a month into his stay there, Bela’s caretakers noticed his abdomen was distended and he was breathing fast. Veterinarians at Best Friends diagnosed him with an aggressive cancer, and the clinic decided it would be best for Bela to be put down. “Bela was a great dog who made many friends and was quickly becoming one of the most popular dogs at the sanctuary,” Best Friends said in a statement Tuesday. Bela was cremated and his ashes are being sent back to Indiana so he can be buried with his owner, as she wished. — Read it at USA Today

A 1-year-old Whippet who’d been missing for five months in New York City arrived back home during the winter storm that hit the city Tuesday, thanks to a firefighter who went out of his way to save the pup. The dog, Burt, had been reported missing in August. FDNY Lt. David Kelly began spotting a dog who met Burt’s description about a month ago at the department’s training camp on Randall’s Island. Kelly, a dog lover, would often bring the dog food from home. But every time he got close, the pup would run away. Kelly was afraid the dog wouldn’t survive the snowstorm, so he brought a cage from home, put food inside and rigged the door with a rope. When Burt came for food at 2 a.m. as the snow was falling, Kelly managed to trap him. He then reached out to the Facebook page Bring Burt Home, and brought the dog to his grateful owner, Lauren Piccolo. “I was with the dog for most of the day and he was still scared of me, but as soon as he saw his owner, he was wagging his tail and licking her,” Kelly said. — Read it at the New York Daily News

Keepers Work Around the Clock During Blizzard

Parts of the Northeast were clobbered with a blizzard Tuesday, and many zookeepers in the region stayed overnight at the zoo to ensure their animals were protected. At Boston’s Franklin Park Zoo, for example, some keepers slept on cots overnight so they could make sure they were there to feed the animals, check on ducks who live outdoors and to start the generators in case the power went out. — Read it at Discovery News 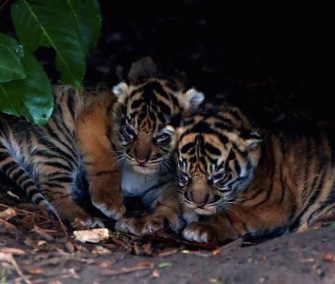 A trio of 3-week-old Sumatran tiger cubs was born at the U.K.’s Chester Zoo on Jan. 2, and has just started to venture from their den — allowing us to get a look at how cute they are. The critically endangered tigers are the offspring of proud 8-year-old mom Kirana and 7-year-old dad Fabi. “It’s still early days but Kirana is an experienced mum and she’s keeping her cubs very well protected. She’s doing everything we would hope at this stage,” said Tim Rowlands, the zoo’s curator of mammals. There are only an estimated 300 to 400 Sumatran tigers left in the wild. It will be several more weeks before keepers at the Chester Zoo can determine the cubs’ genders and names can be selected. — See photos from the Chester Zoo and see more cute zoo babies from 2015

For several days, police had been trying to locate the source of the faint meowing coming from a storm drain in downtown Tampa. On Monday night, with the help of a group of bystanders, three officers finally tracked it down at the intersection of Cass Street and Nebraska Avenue — and pulled an adorable kitten to safety. When Officer Simmons held the kitten, who they named Cassie, it was "love at first sight,” Tampa Police said on Facebook. She now has a new home with the officer. — Read it at Tampa’s Bay News 9